Our Mission is to
Connect with people in Jesus;
Build each other up in faith; and to
Become Like Jesus. 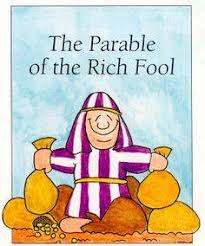 The background for the text is an incident that occurred in Galilee as Jesus was teaching to a large crowd. A man called out from the crowd and asked Jesus to judge between on older brother and himself regarding an inheritance. The real problem is not the request which Jesus refused, but the greed lying beneath the surface of the request which Jesus addressed with a parable about a rich fool.

In the story Jesus tells about a wealthy man, which in his day would probably mean a successful farmer. The rich farmer made wise business decisions and seeing the crops come in with abundance asked himself, “What shall I do to store all my crops?” What is the problem with that? He decided to build bigger and better barns. So, what’s the problem? He says to himself, “You have plenty of grain laid up for many years. Take life easy; eat, drink, and be merry.” That’s the problem. He embraced the voice of greed and ignored the voice of God. The day was coming when he would die and have to face God. That day was coming sooner than he thought, but like a lot of folks, he lived as if he’d never die.

You and I do not have to have Jesus draw us a picture as he did in this parable in order to realize the folly of thinking that life is only a matter of money, or of the security such funds provide. We are the people of God; we know the supreme blessings involved in being “rich toward God.” So that is what we want to consider: “Are we rich in God’s sight?”  IL-WOONG.

BBC Radio 4 – The Secret History of Science and Religion, The Nature of the Beast

Book of the Week:

Australian Christian Life from 1788 by Iain H. Murray.  This book is an introduction to a remarkable period of history.  While Australia’s first white community – convicts and their military gaolers – arrived from England with the name of Christian, it contained few who gave thought to either their own spiritual need or to that of the indigenous Aborigine population.  Nominally Christian, the early colony was largely licentious, brutal and pagan: the least likely of all places to be a successful mission field.  But Christian history is a history of surprises.   From such unpromising beginnings an heroic form of resolute, self-sacrificing yet ‘singing’ Christianity began to make its way.  From among soldiers, convicts, merchants, new settlers and, at long last, Aborigines also, churches came into existence which powerfully affected the greater part of the entire population.  This book aims to give facts and to dispel illusions.  One of those illusions is the opinion that Australia has always been essentially secular and that it has never seen revivals.  Another is the idea that the main problem for the church today lies in the unique nature of modern society and, therefore, no solution to present problems can be found in past history.  On the contrary, these pages show that when Christians are faithful to apostolic truth and to apostolic methods they will always, sooner or later, know apostolic success.

This soccer club has a whole church on side – Eternity News.

Conversations with John Anderson: Featuring Helen Pluckrose editor-in-chief and academic researcher. Helen is an academic researcher and the Editor in Chief of Areo, a non-partisan digital magazine focused on Enlightenment liberalism, humanism, secularism and freedom of expression.

She came to prominence recently for her part in the so-called Grievance Studies affair, where she and two colleagues sort to expose corruption in academic “grievance studies,” by submitting bogus papers to academic journals, some of which were published.

She was in Australia to deliver a lecture to The Ramsay Centre.

She is currently writing a book about the impact of postmodern thought on academia, social-justice movements and wider culture.

When the heart of the community is a club not a church – Eternity News.

Intergenerational Service Evaluation  This is now an opportunity for the whole church to reflect on the progress of our intergenerational service.  Evaluation questionnaires are available from the Stewards.  Please complete and return the questionnaire at your earliest convenience and in any case by this Sunday 4th August. If you have been unable to return the Evaluation this Sunday, please bring it next week and it will be included in the summary.  There will be a collection box in the foyer for completed questionnaires.  All information gathered will be collated, presented to the church and used to improve our intergenerational service.  Any inquiries please speak to IL-WOONG or Lawrie.

The myth of reproductive rights – The Daily Declaration.

“Speak up for those yet to be born” Christians told as Abortion Bill to be debated – Eternity News.